Welcome to the official website for Sarah-Jane Potts, last seen on stage around UK, with Northern Broadsides in FOR LOVE OR MONEY, and on Channel 5 in 8 DAYS THAT MADE ROME. Sarah-Jane recently shot indie feature NO VACANCIES and can currently be seen on stage in the Grosvenor Park Open Air Theatre productions TWELFTH NIGHT, THE BORROWERS and HENRY V. 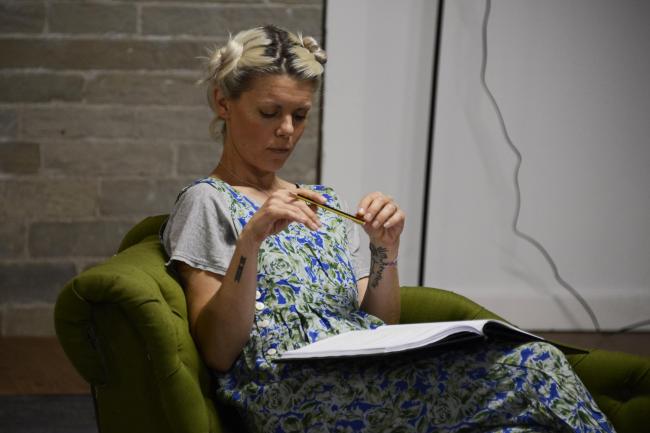 AT first glance, an 18th century French farce about a beautiful widow wooed by two suitors doesn't seem a likely choice for a Yorkshire setting. But, this being a Northern Broadsides production, it's in safe hands. For Love or Money is Skipton-born Blake Morrison's new adaptation of Alain-Rene Lesage's comedy, Turcaret. In the Broadsides tradition of staging classics in the Northern tongue, RP, says Morrison, becomes NBI - "Northern Broadsides Idiom”. It is the final touring production directed by Barrie Rutter, who steps down as artistic director in April 2018.

Set in a small Yorkshire town, For Love or Money is the story of Rose, a widow played by Bradford actress Sarah-Jane Potts, pursued by an older man - a city businessman with a seemingly endless disposable income who showers her with gifts - and a younger, handsome man, also a chronic gambler. Money is a slippery commodity and all is not as it seems. Throw in a bailiff, a drunkard, a vamp, a second-hand clothes dealer and two upwardly mobile servants, and the complications multiply. The play is set just after the First World War. "It was before the Depression hit, and the well-off were still reasonably flush," says Sarah-Jane. "It's amazing how relevant it is today, with the banks situation and nobody really trusting anyone. I guess that says a lot about how little humans have evolved!

"Rose is very much taking care of herself, in any way she can. She's brilliant to play, because she's so multi-faceted. Everyone is playing everyone else, they're all after love or money. The play asks: do you have to be self-insulated, morally, or can we collectively build a better society?"

As this is a farce, the action is fast-moving, with physical performance is as crucial as the dialogue.

"It's all set in one room, with very few props, so you're really aware of what you're doing with your hands. It's very stripped back," says Sarah-Jane. "I've never done a Northern Broadsides production before, I feel very lucky to be working with Barrie (who plays Fuller, the older suitor, as well as directing the play).

"A good text is a good text, whether it's in French or Yorkshire dialect. I love that Barrie challenges what we're taught to think - why does Shakespeare, or any of the classics, have to be done in a posh voice? That just makes it non-inclusive.

"And with this play, the audience doesn't get spoon-fed. It doesn't answer too many questions, it allows the audience to think for themselves. "Things don't have to be resolved neatly at the end. It gives people chance to talk about it in the bar afterwards - and continuing the discussion after a play has ended has got to be a good thing."

Sarah-Jane started acting at Scala Kids and as a child appeared in Bradford Catholic Players' productions. Her impressive career covers TV, film and theatre. She was Lauren in film Kinky Boots, and her TV credits include Sugar Rush, Holby City, Waterloo Road and Gracepoint, the American version of Broadchurch. She recently returned to the stage in A Streetcar Named Desire, alongside Gillian Anderson, in New York, and Macbeth.

"I hadn't done theatre for over 20 years, but I really wanted to be challenged," she says.

* For Love or Money is at the Viaduct Theatre, Halifax, September15-23 and West Yorkshire Playhouse, September 26-3

For Love Or Money Theatre